Mitsuwa Shoyu Brewery has been producing soy sauce in the time-honored, local style for over 100 years. Although we strictly adhere to tradition, we also constantly pursue new flavors to meet customers’ needs. Try our soy sauce and experience our uncompromising commitment to flavor.

Mitsuwa Shoyu Brewery constantly researches and develops products to meet customer needs. We produce a wide range of delicious, healthy soy sauces—from Kyushu soy sauce made in the traditional, local style with its distinct umami and sweetness, to authentically-brewed soy sauce made with salt from Nagasaki Prefecture and whole soybeans (Fukuyutaka) and wheat (Minaminokaori, Chikugoizumi, and others) from Fukuoka Prefecture. We also produce authentically-brewed premium koikuchi and usukuchi soy sauce that are used in local elementary and junior high school lunches.
The Japan Agricultural Standard for Soy Sauce was established in 1963. Our brewery was certified that same year, and our soy sauce has passed JAS inspection to guarantee its quality every month since.
While standard koikuchi soy sauce has a salt content of 17.5%, our Fukuju, Sashimi, and Fuji soy sauces have only 11-12% and yet have a rich, umami taste that locals have loved for over 100 years, demonstrating our uncompromising commitment to flavor.
And to help out those who don’t have the time to make extravagant meals, we are developing a new series called “Okazu-no-Mikata” that can turn any meal into a delicious feast. We hope it brings smiles, togetherness, and warmth to everyone’s dinner table.
We will continue to dedicate our efforts to making soy sauce that keeps with the time-honored, traditional flavor that everyone loves, under the motto: “Healthiness starts with a joyful meal.” Experience the uncompromising flavor of Mitsuwa Shoyu soy sauce. 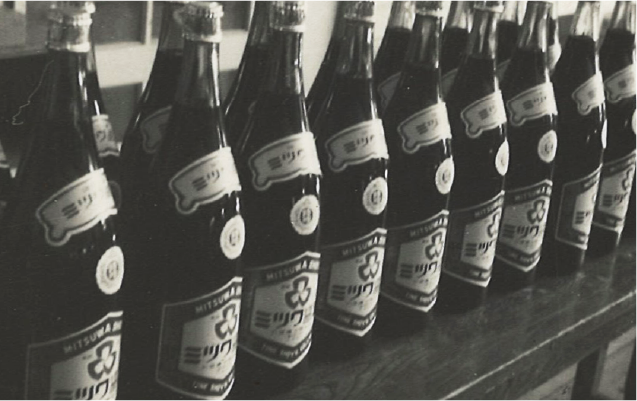 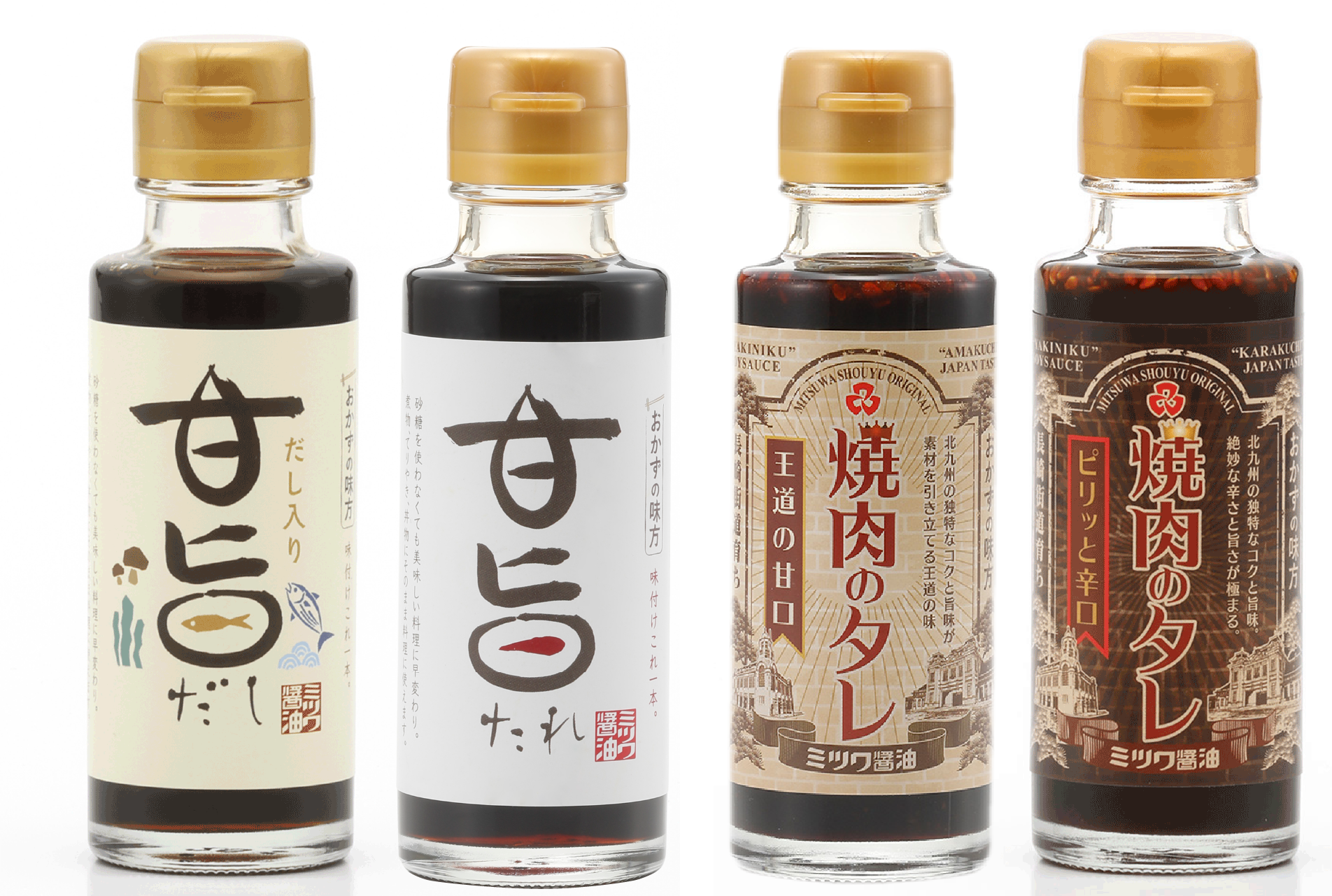 The 3 Elements of Soy Sauce

Soy sauce is a kind of seasoning made up of three elements: color, taste, and aroma. Soybeans are the main ingredient. Soybean protein and wheat starch are fermented and aged, and transformed into a variety of taste, color, and aroma compounds. The subtle and complex color, taste, and aroma of soy sauce brings out the flavor of a wide range of dishes—from Western to Chinese and Japanese.

Color—Pleasant Color that Stimulates the Appetite

Sweetness: The sweetness of soy sauce comes from the wheat starch turning into glucose during the brewing process. It gives soy sauce a mild, well-rounded taste. When you put it in your mouth, you can taste a slight sweetness on the tip of your tongue.

Sourness: Lactic acid bacteria turns glucose into organic acids. That is where the sourness of soy sauce comes from. It has the effect of reducing the saltiness and enhancing the taste.

Saltiness: Koikuchi soy sauce has a salt content of 15–17%, but the reason it doesn’t seem that salty is that the other taste compounds reduce the saltiness, creating a robust flavor.

Bitterness: There are several compounds that make up the bittiness of soy sauce. Although you can’t taste the bitterness directly, it is the secret ingredient that gives soy sauce its richness and brings out the flavor.

Umami: The umami of soy sauce comes from the soybean and wheat proteins being broken down by koji mold enzymes and transforming into 20 types of amino acids. One of those is glutamic acid, which plays the lead role in the umami taste of soy sauce.

The aroma of soy sauce is very complex, created by microorganisms such as koji mold, yeast, and lactic acid bacteria. There are at least 300 aroma compounds in authentically-brewed soy sauce, which include notes of apple, rose, and vanilla, and that’s just what has been discovered so far. These notes harmonize perfectly without any one standing out over the other, giving soy sauce its distinctive aroma. Soy sauce can be used to tone down strong flavors in seafood and meat, and gives off a savory aroma when cooked.

As a seasoning, soy sauce adds color, taste, and aroma to food. Its taste comes mainly from soybean proteins and its aroma from wheat starch, each brought out by the activity of microorganisms. Soy sauce is the result of each ingredient interacting with each other and being slowly fermented and aged over a long period of time.

Soybeans and defatted soybeans
Soybeans are mainly composed of protein, which is broken down by enzymes in koji mold called protease, and converted into amino acids that give soy sauce its umami taste. Defatted soybeans are soybeans in which unneeded fat has been removed so that only the protein that is needed to produce soy sauce remains.

wheat
Wheat is mainly composed of starch. This is converted into glucose by a koji mold enzyme called amylase that gives soy sauce its sweetness and richness. Then lactic acid bacteria convert the glucose into organic acids such as lactic acid and acetic acid, which reduce the saltiness and bring out the flavor of soy sauce. Some of the glucose is converted to alcohol by yeast, which works to enhance the aroma.

Table salt
Table salt is dissolved in water and added in the final stage of the soy sauce brewing process. This is what gives soy sauce its salty taste. 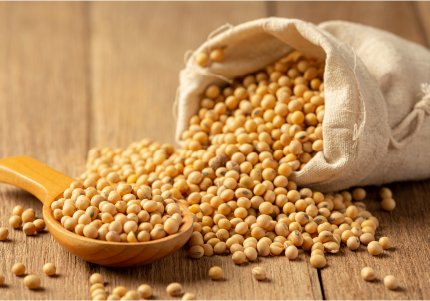 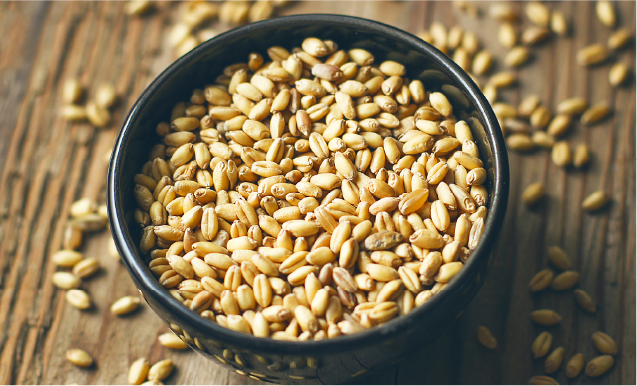 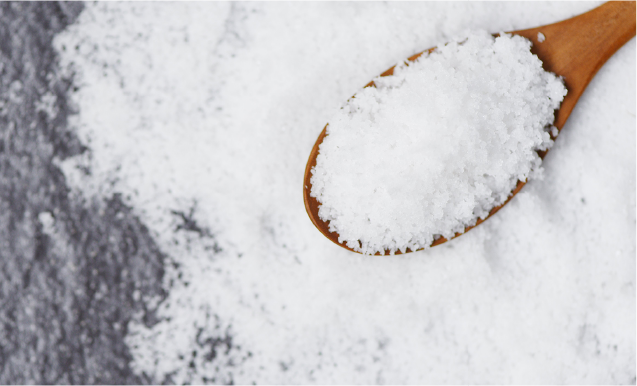 How Soy Sauce Is Made (Authentic Brewing Method)

Here is the traditional way of making soy sauce. Nearly equal parts of steamed soybeans (defatted soybeans) and roasted wheat are mixed together, and koji spores are added to make koji. The koji is placed in a tank with brine to make moromi (mash), which is aged for six to eight months while being stirred occasionally. Koji mold, yeast, and lactic acid bacteria break down the proteins and starches, and cause fermentation. Finally, the mixture is aged, producing the distinctive color, taste, and aroma of soy sauce. 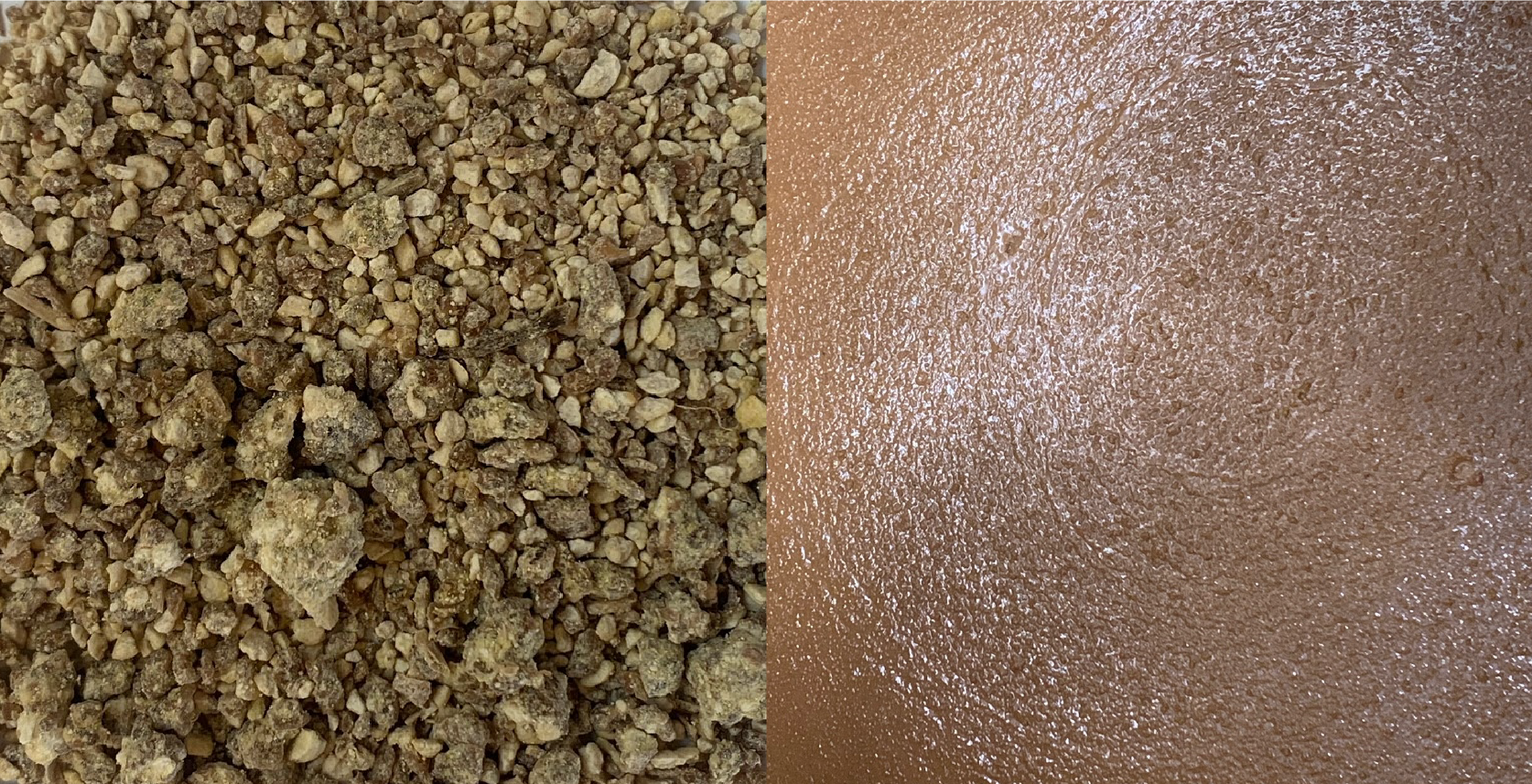 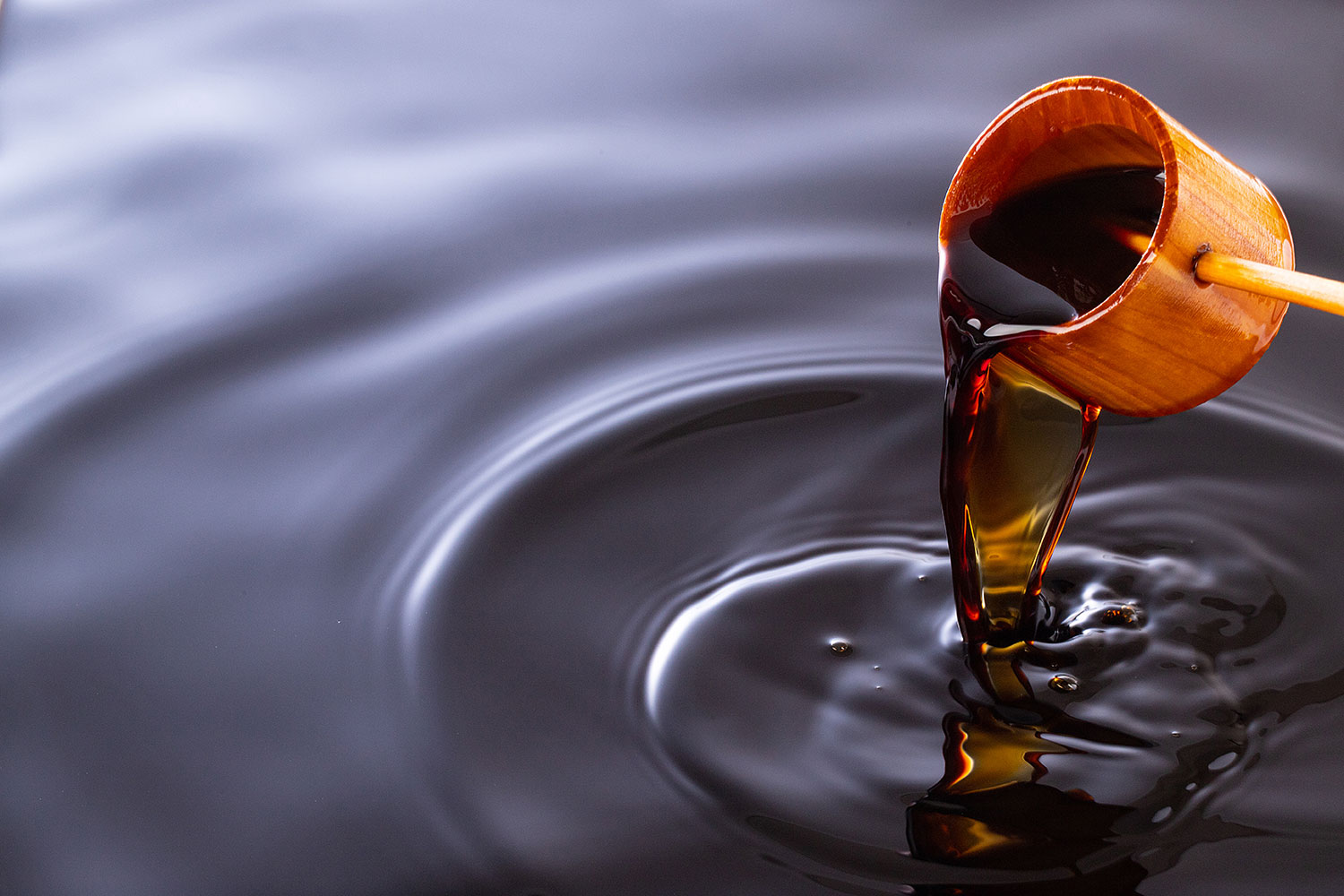 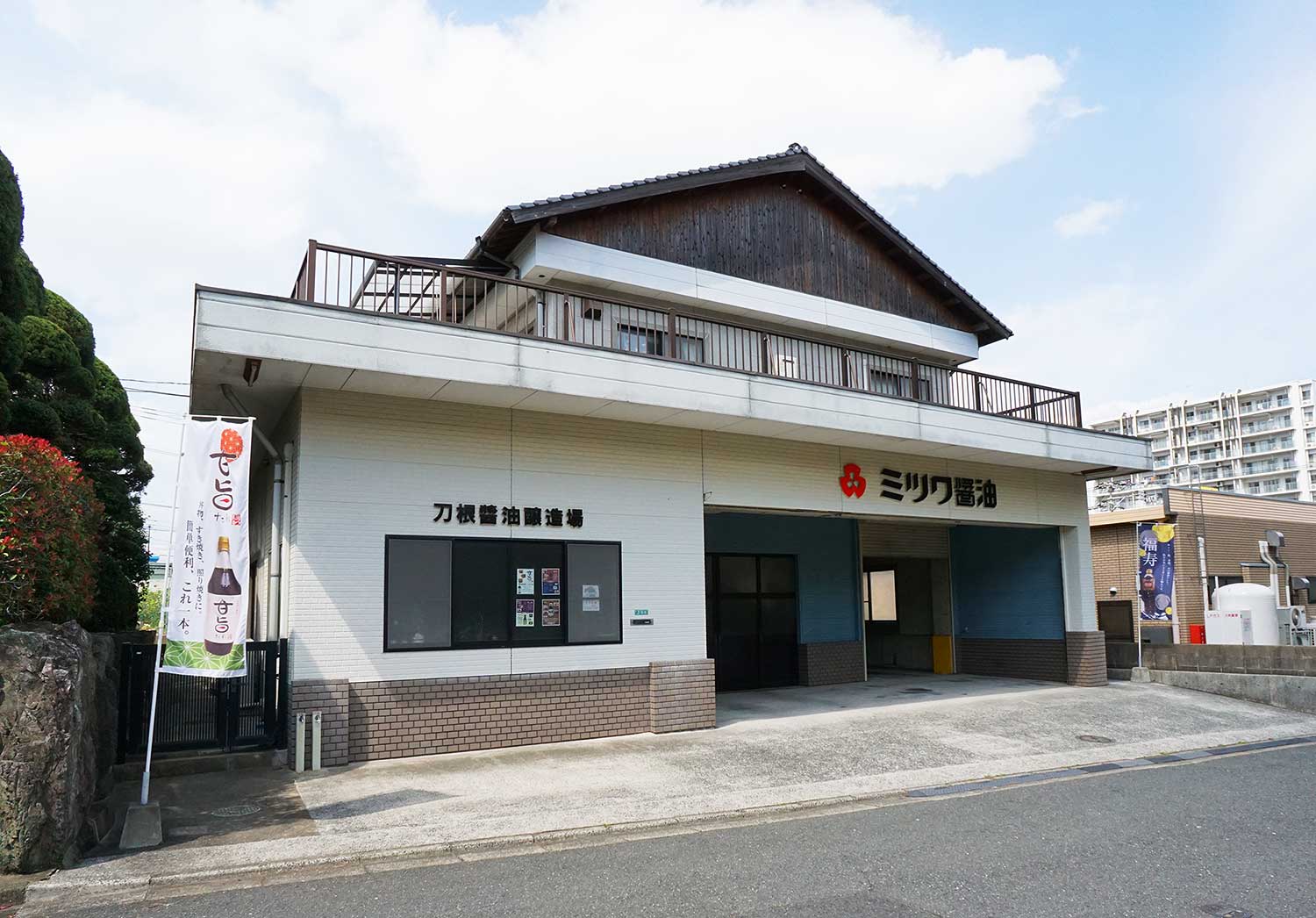